skip to main | skip to sidebar


If only I would actually remember to keep posting here.

Anyway, I'm currently developing a patch called [069] Polish Sludge, in honour of the new Polish school of the mid 20th century, and because It can make anything and everything sound like a bog of sludge. It uses simple time manipulation of audio files to create a sound mass. At the moment I'm running old samples through it, but intend on using it in my final recital with either guitars or another form of distorted instrument.

That is all, for now.
Theo
Posted by Theo - Holy Thanochist at 9:48 PM No comments:

Drowned in Rum From Beyond 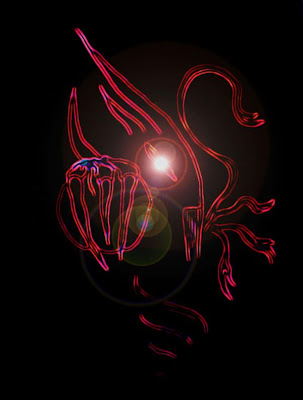 Few of the bands in the Perth metal scene can say they actually achieve a sense of despondency when attempting to write black metal. From Beyond, however seem to be able to achieve this with ease. The seven track EP Drowned In Rum is a combination of slow, depressing doom and the harsh bitterness of black metal; more commonly known in the metal circles as dark metal.

The songs have a distinct black metal sounding production. The guitars, seem to be off somewhere in the distance only to be heard as they swamp the stereo field in the vast amounts of reverb that they have been given. It gives the melancholic, clean guitar parts a strong sense of isolation and the distorted guitar leads even moreso. As a bass guitar cannot be heard in the recordings, the occasional bass support the songs receive come from long string melodies with a big low end. This works very well when the guitars slowly fade out, leaving the low bass end with another slow string melody to fade in, replacing the guitars lead.

As there are no drums in the entire EP, there is no feeling of attack or pace. No matter what tremolo the guitars may be playing or what screeches the vocals may be creating, the songs linger on in their slow tread. The vocals don't have the distance that the other instruments do, however are still in a black metal combination of screams, wails and shrieks. Overall, the album seems to have developed a strong link to dark metal, with a greater emphasis on playing bleak melodies rather than playing slowly. For fans of Bethlehem and Wolves in the Throne Room, From Beyond are a local band that will help anyone find the much needed desolation in their music listening experience.

Beneath The Eclipse She Bore Abominations by From beyond
Posted by Theo - Holy Thanochist at 2:48 PM No comments:

I wrote another piece today. I would not say it is the most creative, ingenious or far fetched piece, but it was inspired by the soundtrack I wrote for a Murdoch student film Wigskin. The piece is quite simple, minimalistic, and only uses 2 short tracks of audio, however the piece itself is over 16 minutes long. I've only recently referred to it as furniture music for the bored.

That is all
Theo
Posted by Theo - Holy Thanochist at 8:03 PM No comments:

I have placed some files here for your streaming pleasure.

This past week has had the music technology and composition students perform their works in various ways. The first years had a listening lounge; a continuous loop where one could come and listen as they pleased. The second years produced installations, ranging from an array of old speakers run by tape decks in a stairwell, to walking around with a fish bowl on your head. The third years (Aletheia) did a live streaming performance with RMIT from the other side of the country. It was a very interesting performance. I had the task of controlling the mixer and many of the technical sides of the performance. While other third years were contributing to the audio stream with their various choice of instrument eg clarinet, synth, guitar, laptop. I have a recording of the night which I will upload once I have combined the streams.

Wednesday night just gone, I did a solo performance with the Doom patch once again. I thought I would take advantage of the space and acoustics of the KK Gallery. The piece started off rather uncontrollably, but I managed to get it together and produced some rather, demonic sounds. That recording will be uploaded soon to the downloads page.

But today! A revelation has occurred. The Doom patch is no longer a static entity, the Doom patch is now abstracted and can be arranged and manipulated allowing me to create many streams that loop into each other and wherever I would like to send them. This is a great step as this combines the melodic qualities of the Machine patch with the feedback/chaotic qualities of the Doom patch. Ultimately this allows me to do what I do in both of those patches, with one freeform abstraction. It is also going to be of awesome help when I've created my feedback chambers.

That is all
Posted by Theo - Holy Thanochist at 2:04 PM No comments:

Last night I revisited the Doom patch. I wrote a piece using my living room and an arrangement of speakers. I've no idea of the origins of some of the sounds that were produced, they just existed. The song is called larvae for a few reasons, although the primary reason is that it sounds like larvae exploding. It was originally called Moth, but changed due to the stronger themes of larvae. Besides, people can use their imagination a bit more if it's called Larvae.

It is available for download on the downloads page.

That is all
Posted by Theo - Holy Thanochist at 10:58 AM No comments:

It's been a month since my last post. Next week I have a performance at WAAPA. I've chosen to do a premier of my new Thaddaeus piece The Aeneid, based on the epic written by Virgil around 2000 years ago. It's another relatively short song, however continuing on the theme of the previous Thaddaeus song In The Autumn.

Recording to be done soon, with Sedaal adding some guest vocals.

That is all
Theo
Posted by Theo - Holy Thanochist at 1:44 PM No comments:

Theo - Holy Thanochist
Theo is a music technology student at the Western Australian Academy of Performing Arts. He has experience playing guitar and various woodwinds. Most of his work is based around electronic doom and ways to access the doom present in electronics and computing.